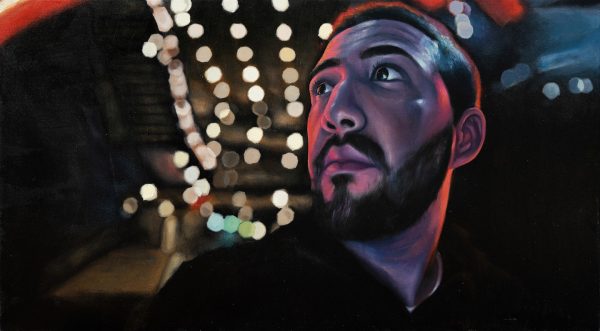 Fundamentally, Duran’s works serve as an exploration of the relationship between painting and photography. Thematically, they inquire into the role urbanization plays in social fragmentation and the disintegration of human interactions. By often depicting isolated figures roaming through empty and artificially-lit cityscapes, his hope is to highlight how—instead of forming intrapersonal relationships—metropolitan areas can help foster the feeling of isolation; But also, he hopes to form a communal experience built upon our shared moments of isolation.

A frequent technique Angel Duran incorporates into his paintings is the bokeh effect found in photography. Bokeh is defined as the aesthetic quality of the blur produced in the out-of-focus parts of an image; however, his intention is not to simply paint blurry photographs, but rather, to address a hierarchy through blurring. For example—while still able to use figures as his prime subject matter— the blurring of the image allows him to investigate artificial light as its own subject matter. Everything becomes equally important and equally insignificant. What is left is emotional resonance.