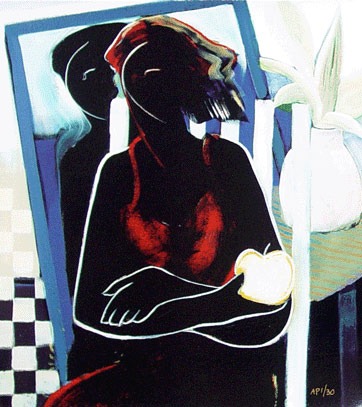 HESSAM ABRISHAMI – Born in the city of Shiraz, Iran in 1951.

At age 15, through the inspiration and encouragement of a high school teacher, Hessam discovered both his love of art and his own talent for painting. As a result, he became almost obsessed with painting. Hessam, at age 17, received his first award and went on to win top honors in painting in an all-country student competition in Iran. At age 19, he achieved first place honors in the “Iranian New Artists Competition.” Many other national and international honors and recognition have followed since.

He went on to study in Italy – a place he considered “the center of art in Europe.” It was in Perugia, Italy that Hessam studied and completed his Master’s Degree in Fine Arts at the Accademi De Belle Arti “Pietro Vanucci.” In 1980, Hessam returned to Iran and had two major exhibitions at the Museum of Contemporary Art in Tehran and at Gallery Derissi in Shiraz. Afterwards, Hessam published a retrospective of his works in a book called “Scream”.

In 1984, Hessam emigrated to Los Angeles, California where he continued to expand his creativity. After multiple fairs and exhibitions throughout the United States, he was recognized by an art publisher, Collectors Editions, and signed a contract to show and represent his artworks through multiple galleries worldwide. In 2001, he then founded his own publishing company, Studio Fine Art, to continue to expand his collector base. In his tenure as an established artist, Hessam has published 6 retrospective books and has had his images on the covers and chapter headings of 9 Sociology and Psychology university textbooks.

In 2006, during an exhibition at the Museum of Arts and Sciences of Ormond Beach, Florida, Hessam was presented with the “Key to the City” and a proclamation from the Mayor stating March 24, 2006 as “Hessam Abrishami Day”. In 2007, Hessam was invited by the American Liberty University in association with California Polytechnic University in Pomona to receive an Honorary Doctorate to commemorate his achievements as a fine art painter.