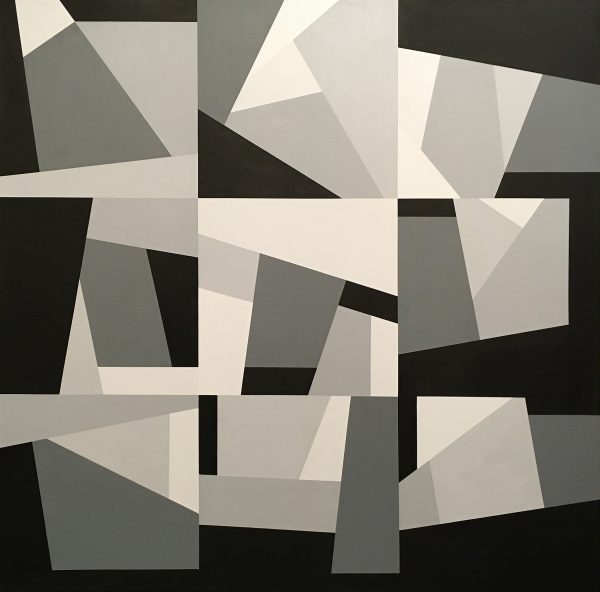 My current series is entitled “Angels” and is realized from the abstract shapes chosen in a composition of squares with abstract elements in each one. My working title, “angles and I”, was more straightforward. As the work evolved, I thought it was too simplistic and not as reflective of the work. So, I changed a few letters around and came up with “Angels”. Perhaps the abstract shapes can be conjured up to represent almost anything but as “Angels” the viewer can become immersed into a realm of religious scenes.

I am happy that these pieces are presented in such a way as to make the viewer do a little bit of work and conceive images and scenes on their own.

It occurred to me when I finished one of the paintings in the series that perhaps these abstract shapes can be perceived as something entirely different from what it appears.

How do you conjure an image of something that is not real but only exists in imaginations? Does your brain begin to created scenes in your mind?

I guess first you would have to know about religion and the role Angels play. In almost all religions, they exist.

An Angel is generally a supernatural being found in various religions and mythologies. Abrahamic religions often depict angels as benevolent celestial beings who act as intermediaries between God (or Heaven) and humanity.

There have been good Angels and bad Angels and the ones portrait- ed in this series are all good. They help people to do good things and watch over them.