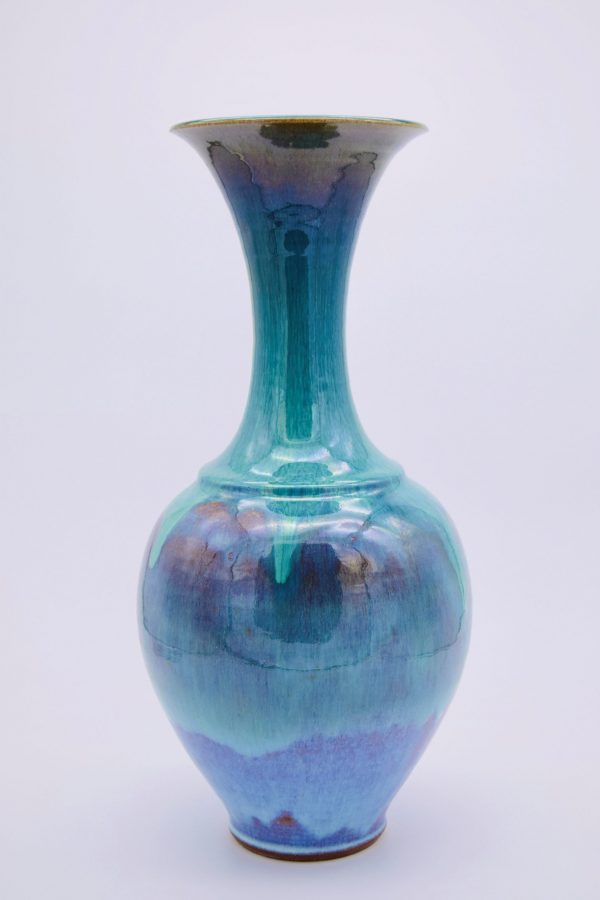 Toshinori (Toshi) Munakata is a Japanese ceramic artist who is inspired by the nature of his homeland in northern Japan. He is a ninth-generation potter, as his ancestor started his kiln in 1719. According to Toshi, he was lucky because he was able to learn the basic techniques of pottery making, such as refining clays, throwing a potter’s wheel, and glazing and firing pottery. His style contrasts with those of his father and grandfather, which are solid and massive works of traditional style. He aims to create works with elegant shapes and delicately colored surfaces.

Toshi is excited to show his art works at the ArtExpo New York, as they differ from the long-established tradition of works made at the Munakata kiln. Living in a cold region, he tries to give form to his longing for spring by creating jade green vases and bowls. Toshi
is well known to Japanese because he has exhibited his works in a variety of major art galleries in Japan. He is also known to Chinese because he won the Silver Prize at the 2nd China Tea Ware Contest in Jingdezhen in 2018. This solo exhibition in the art fair in New York will be his US debut.

Artist statement by Toshinori (Toshi) Munakata:
I was born and raised in the northern Japan area called Aizu where nature is beautiful. Surrounded by mountains and rivers, I feel that nature offers enjoyments of each of the four seasons. I am inspired by nature of my homeland and make pottery by using local clays and plant ash glazes. Also, I am impressed by plants and animals as well as by their vital energy.

The clays are fired in the kiln where the temperature reaches 1,200 degrees Celsius. The fire blazed for days tightens clays and shapes my works. I aim to create works of elegant lines and curves with delicate surfaces of gradation and gloss. Also, I create works inspired by plants and animals. My crane-neck flower vase has a long neck with a beak on the top expressing a crane just taking off from the tree. Regarding colors, I use green color glazes because I intend to express fresh green leaves of spring after a long severe winter of my homeland. As a person raised in a cold region, I hope to give form to my longing for spring.

I am a ninth-generation potter of Munakata kiln where my ancestor started his kiln in 1719. Since its launch of kiln, Munakata kiln has produced pottery for 300 years by using clays gotten from the mountain behind the kiln and by using local natural ash glazes. The main characteristics of Munakata kiln is solid and massive pottery with dark colors which reflect nature of severe winter. During the times of my great-grandfather Munakata the 6th, British potter Bernard Leach visited the kiln in 1954 and highly appreciated the works of Munakata kiln. In 1958, one of Munakata kiln’s bowls received a grand prize in the Brussels World Exposition.

I learned a lot from long-established technique of Munakata kiln such as throwing a wheel, glazing ceramics, refining clays and firing clays. Being able to easily make an access to those accumulated knowledge and experiences of Munakata kiln is my advantage. On the other hand, I as a contemporary person create my original works unlike works by Munakata kiln. I aim to produce new style of works which are beautiful curved lines with delicate colors.

I am interested in the works of Bernard Leach who once visited Munakata kiln. I think that his style of integrating cultures of the West and East is unique and essential. Some of my works such as vases are likened to those works by Austrian potter Lucie Rie. I think that Rie has different background and culture from those of mine, but I feel honored to be compared with such an outstanding artist like Rie.

When I go to work every day by walking from my house to the kiln, I see fragments of pottery on the ground of mountain path which were produced a few hundred years ago by unknown potters of Munakata kiln. Those fragmented pieces of pottery include abundant information on clays and glazes. In addition, I see traces of creation by potters of those days. I think that I am lucky to be able to focus on creating works inspired by works by those preceding potters.