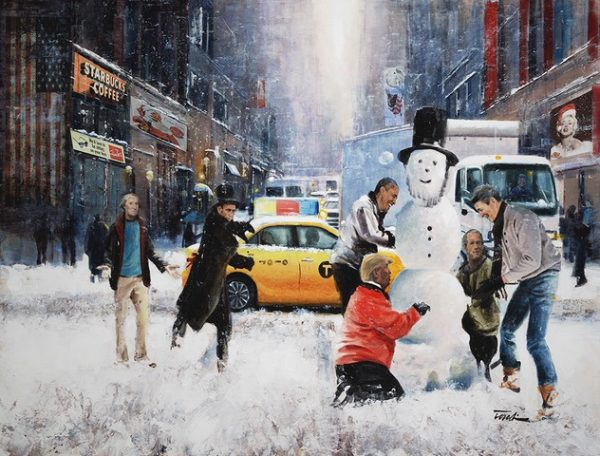 Born in 1980, Persian artist Reza Torabi believes he was born an artist. As a child, viewing a beautiful painting sent his heart racing; he never had a doubt that this was his destined path. A young Torabi found charcoal and chalk around the house and began drawing on any and every surface, much to his mother’s chagrin. Luckily, his parents encouraged him to hone his craft. His father, whose heavy brow and deep-set features were ideal for charcoal representations, would sit for endless portraits as Torabi perfected his technique. Soon, teenage  Torabi received commissions for portraits of religious icons and began supporting himself with his art.

He attended Güzel Sanatlar University where he studied fine art history, poetry and Azari music. He kicked off his career in 2003 with his first solo exhibition, followed by many more award winning shows. Torabi yearned to share his knowledge and techniques with others, and he began teaching oil painting in his atelier in his hometown.

Torabi moved to Turkey in 2010, where he embraced his new-found freedom as an artist. He could experiment with new mediums, selling paintings and drawings to local clientele. The focus of his first exhibition in Turkey was black India ink drawings. His first show was the start of a new era for him – a rebirth.

Torabi found comfort in Turkey’s acceptance; however, he grew up dreaming of painting in the United States, and actively pursued a cross-continental move. In 2012, through the United Nation’s Artistic Freedom Refugee Program, he was able to move to the U.S. He now resides in Atlanta, Georgia, pursuing his fine art career and performing with a group of musicians on his down time.

His first series in his new location, Life in Motion, represents the café and gathering scenes he had become homesick for. These paintings kept his memories alive and combined collage with a new style which he calls “blurred motion.” This blurred motion style has carried over to his latest series Sevda, Turkish for “a bigger love.” This body of work combines the experimentation of Life in Motion with his true talent of portraiture.

Wanting the American dream to become permanent, Torabi took his U.S citizenship test in 2019. While studying the history of the country, he became fascinated with the powerful image of the presidency. Naturally, this sparked the idea for the “Presidents” Collection. By combining well known American figures, pop culture icons, and famous scenery, Torabi has created a perfect blend of what comes to mind when one thinks of the U.S.A with a slightly humorous approach. The contrasting loose abstract  brush strokes with the meticulous detail of Torabi’s portraits display the true power and versatility of his artistic talent. His desire to grow and expand creatively keeps his mind and heart immersed in his craft.