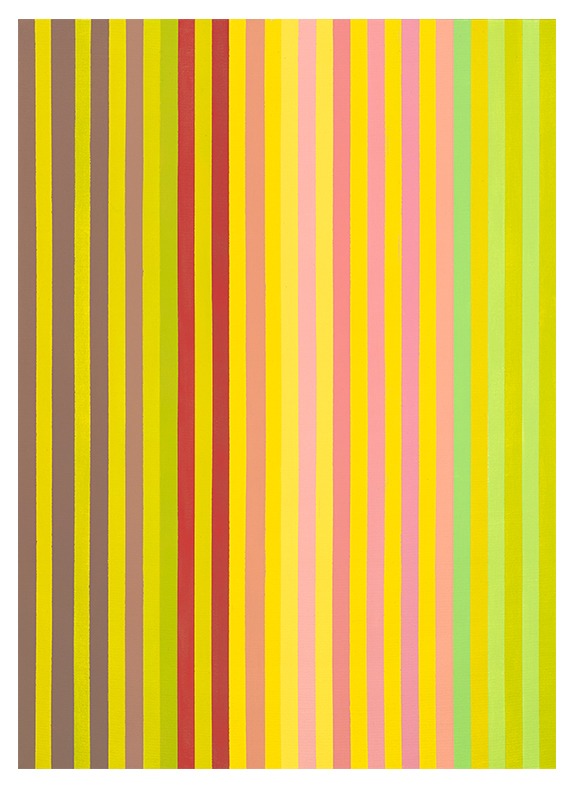 My paintings are hard edge colour field linear abstractions, a style rooted in a movement that began in New York City in the 1940s pioneered by Mark Rothko, Barnett Newman, and Clyfford Still. Their work explored a departure from illustration to sensory connections with primal emotions by exploiting the expressive power of colour. Growing up in Australia, I enjoyed a playground of raw beauty and rich colours in each season. My work is influenced by those rich colours that excited my visual senses and emotions: the spectrum of greens in the foliage, vivid pinks and orange summer sunsets, deep blue to aqua waters, light blue skies, rust earth of the outback, and bright red, violet, mauve, and yellow flowers and fruits.

My paintings are conversations of colours inspired by my homeland as well as modern art, minimalism, modernist architecture, and design. Each canvas is a rhythm of hues and tones in precisely defined lanes of like and juxtaposed colours repeated in values of one, two, and three. Every color is a sentence in a conversation that flows from beginning to end across the canvas. A sense of quietude is present, free of distraction, to arouse a connection between our visual senses and pure emotions.

I use heavy body acrylic paints for my work because they are easy to blend and dry quickly. After meticulously taping several canvasses or panel boards, I blend the paints and create one, two, or three lanes. My internal conversation about the art itself and other elements of life, such as a family event or the news, determines the colors.

My work has been compared to that of Gene Davis, one of six founders of the iconic Washington Colour School in the 1950s. Ironically, I had never heard of him until 2018, after a comparison was made while I was showing at an art fair in Washington, D.C.  While our work may look similar, our philosophies are quite different. I believe in numerology and color therapy. My work is guided by the repetition of certain numbers and their patterns. I also believe in the power of colors and our subconscious relationship with them, including their ability to assist the body in healing itself.

We all have a subconscious relationship with color that affects us. However, we are conditioned to respond to colours in expected ways, like associating red with danger. I want people to explore feeling the colours before judging them. My paintings provide an opportunity to do so.