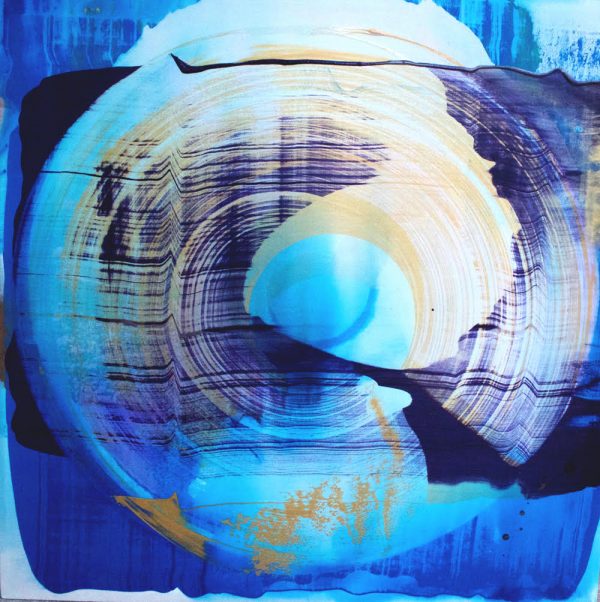 Many of my paintings reference the colors and palettes used on the original Star Trek TV series. The extreme color relationships and ‘out of this world’ combinations are truly riveting. In this particular episode, the crew perpetually struggles with the on board navigation of the Enterprise and the colors reference not only space but the shifting colors and light as the ship struggles to stay on course and maintain control.

The works and the world of Gregg Emery are inherently imperfect: purposefully paradoxical marriages between simplicity and complexity, clarity and confusion. Emery uses each of his works to complicate his two recurring forms: the circle and the rectangle. He uses sheer physicality to drag his paint into these two shapes, allowing the colors and individual marks of each bristle to interact with one another on his muslin base in ways that are both entirely intentional, yet also left slightly to chance. Each of Emery’s pieces contains a unique, yet often limited, color palette, often inspired by unexpected sources. Derived from his everyday life, a movie scene, sunset, food or even a rusted dumpster.

Through his powerful color selections and movements, Emery awakens something primal within his viewers. He triggers associations both intended and unexpected, allowing the viewer to continuously enjoy the works with their own, ever-evolving interpretations. His own inspirations combine western mystical experiences with his Quaker grandmother and a long-time study of and within Eastern cultures, particularly Zen traditions and the Gutai Movement in Japan.

The past couple of years have been particularly strong for Emery as he has received critical acclaim for his exhibits around the globe. From Brussels to Beijing and back again. Since 2017, Emery has commissioned and completed an 8,000 sq. ft. mural around a pool on Roosevelt Island that was featured in Time Out NY, the Gothamist and was listed by The New York Post as one of the top instagrammable places of the summer. He was selected to exhibit in the 10th Annual Governors Island Art Fair, dubbed by the New York Times as the Art Fair of the 99%. From there it was off to Brussels and the Cube Art Fair, where Emery’s paintings could be viewed alongside the work of Chuck Close and other American greats. This past year his paintings were featured during Miami Art Basel and was also shown in Art New York at Pier 94. Notably, they appeared prominently this spring in Season 2 of the widely acclaimed TV Show, ‘The Last O.G.’