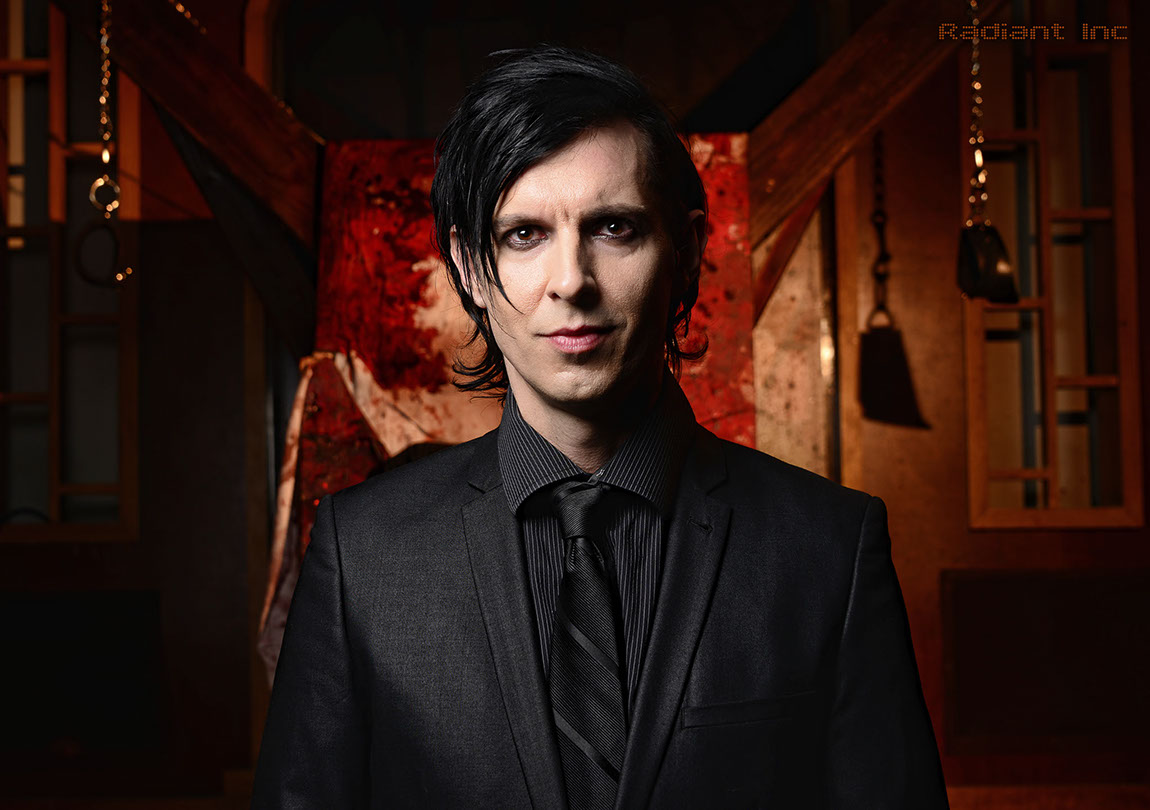 While Curse Mackey is well-known as a musician, DJ and performer of industrial and electronic music, having toured around the world with an extensive catalog of recorded releases and artistic collaborations—music and performances aren’t the only staple in the environment that Curse had created for his fans.
Originally an architecture and interior design major at Texas State University, Visual Art has always been deeply intertwined with Curse’s creative output which has been magnified by the release of his debut solo album Instant Exorcism.
Curse explains, “What I’m doing now is creating pieces that are part of the Instant Exorcism experience. There’s a body of musical composition that are what people expect to hear with an album, but there’s also this visual world, one that is completely unexpected and surreal with paintings, ambient videos, projected film for stage, collages, sculptures, custom box packaging that are part of the album artwork and the visual, thematic experience that comes to life in the theater or gallery.”
Speaking of coming to life on stage, Curse is also known for his live performance paintings in which he creates abstract works on 5′ x 5′ canvases as part of his live electronic music performance.  “As I’m playing this engulfing wave of electronic music there is paint and torn pages from transgressive literature, theology and other propaganda strategically placed  on the canvas beneath my feet and equipment. As I perform, and move my feet and body throughout the performance I am mulching, churning the paint and the paper across the canvas combining it with the energy of the performance together for an hour.  Once the show is over, I’m able to reveal these most profound abstract works that are literally a visual interpretation of the musical and spiritual journey I traveled during the show. It’s an alchemical process that never ceases to amaze  in its’ reveal.”
Mackey discusses his working sculptures: “For the Instant Exorcism Paranormal Field Recorder, I found some old portable cassette players that I collaged and painted, then those machines come with a cassette of my music inside of it. So, essentially, the cassette comes with its own one-of-a-kind original art piece as cassette player. There is also a paranormal recorder that both plays and records, so you can remove my cassette, or record over it, and perhaps make your own weird collage tapes with this recorder—it seems to pick up strange sounds in the cemetery next door to my house (laughs). I’ve been enjoying creating these one of a kind, rare relics that make for unique collectability and ongoing interaction with my music and art.”
Curse’s art has been seen at Performa 19 NYC, the largest performing arts biennial in the world, Juxtapoz Magazine, and Art Forum among others, and he has two books published on his large scale curatorial projects. His first book RIDES OF PASSAGE explores the world of snowboarding and urban art with participation from NYC graffiti legends, Stash, Futura 2000, Tristan Eaton and many more. His second book, DRAW (with Erik Foss) features over 600 drawings from the likes of Richard Serra, HR Giger, Tom Sachs, D-Face, Barry McGee, KAWS, Kat Von D, WK Interact, Ron English, Ben Cho and many other legends of their fields.
The DRAW book can be found in the library at The Menil Collection and the Thomas J. Watson Library at the Metropolitan Museum of Art, NYC.
Learn More Shop Art