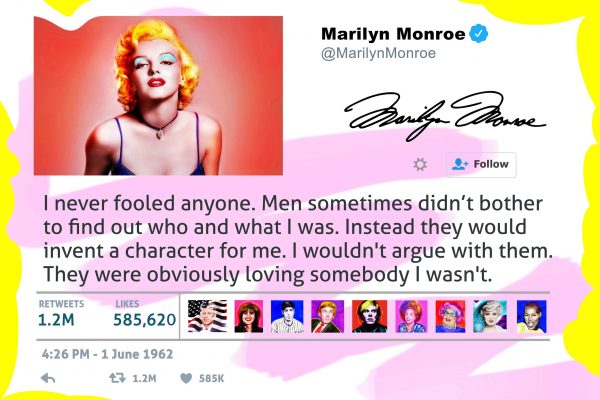 We believe we actually know them and that we even have a relationship with them.

This is particularly true with Marilyn Monroe – the blonde bombshell of the 1950s who later became an icon playing the blonde stereotype – dumb, naïve, sexually available and artificial.  Her star image was created for the male gaze.

In her autobiography, co written with Ben Hecht and released a decade after her death, she reveals the way people, particularly men fell in love with the image they created for her:

“I’ve never fooled anyone. I’ve let men sometimes fool themselves. Men sometimes didn’t bother to find out who and what I was. Instead they would invent a character for me. I wouldn’t argue with them. They were obviously loving somebody I wasn’t.”

My series “Famous Tweets In History” explores and highlights the timelessness of meaningful words by famous people. Some of those people, such as Marilyn Monroe impacted the world at time when the words were written, spoken or televised but not able to be Tweeted.

The written and spoken quotes of authors, poets, celebrities, politicians, scientists and philosophers of yesterday are the Tweets of today.

What might have occurred if Twitter existed in 1962 when Marilyn was writing her book and revealing her pain and true story? Who would have been her followers?

Unlike Warhol who usually painted or silk-screened his subjects and flattened the eyes, I wanted to highlight the eyes and reveal more of the emotion of each subject by painting each one with a style that matches their personality or character.

I also neutralized the boundaries of time while also highlighting the people that could have been Marilyn’s Followers (some of them if they had been alive such as Donald Trump who had various affairs, Grace Jones another sexual icon or Dame Edna Everage –  a man who created an image of an exaggerated, flamboyant  and sexual woman designed to entertain the masses.)

This piece, “MARILYN: THEY LOVED SOMEBODY I WASN’T”, captures a historic moment while blurring the lines of time and reinforcing the way we love the images we create  of others and yet often detest the false images people create of us!