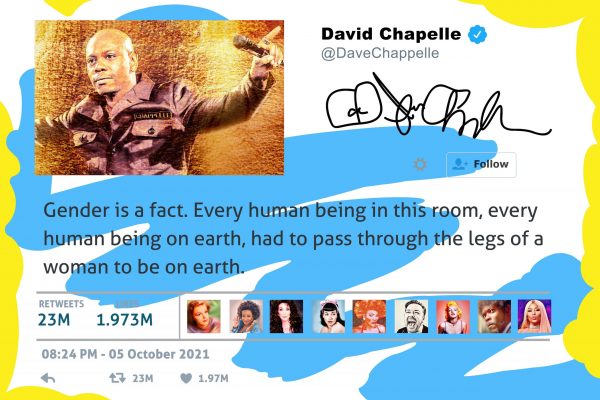 Famous Tweets In History: Dave Chappelle – Gender Is A Fact

“Dave Chappelle – Gender Is A Fact.”

Twitter has changed the way we communicate: A message that you post today can be seen and read globally, recorded for posterity, and even used against you in the future.

My series “Famous Tweets In History” explores and highlights the timelessness of meaningful and memorable words by famous people.

Some of those people, such as Marilyn Monroe, Bill Clinton, Albert Einstein and Clint Eastwood shocked or impacted the world at times when their words were written, spoken or televised but were not able to be Tweeted.

The written and spoken quotes of authors, poets, celebrities, politicians and philosophers of yesterday are the Tweets of today.

In every creation I satirize and glorify the subject and their famous or controversial words, and I explore who would have been his/her Followers if there were no boundaries of time – if everyone lived at the same time.

My intention is to capture the expressive and exaggerated form of each subject, and to exaggerate it even more with the use of color while often using an existing pose or image to reflect the real character of the subject.

I present a pop art interpretation and stylization with spontaneous, expressive, neon colors representing the flashy yet shallow way we see the world and celebrities, our obsession with fame and Hollywood, and the flashy and shallow way they are often represented or sold to the public. Occasionally, I may feature colors from the time period to create nostalgia while still manifesting a sense that it is happening today.

I also neutralize the boundaries of time while highlighting the people that could have been each subject’s Followers (some of them if they had been alive and all of whom are icons, larger than life, controversial or a caricature. As in my other creations in this series, I digitally paint each follower often in a style that matches or accentuates their personality, character or message.

Netflix’s Dave Chappelle special, The Closer, generated controversy over his jokes and content, most of all, “Gender is a fact. Every human being in this room, every human being on earth, had to pass through the legs of a woman to be on earth.”

The reaction by the LBGTQ community, including a protest by LBGTQ Netflix employees raises a key issue about life, love, and relationships:

“Our culture has accepted two huge lies: The first is that if you disagree with someone’s lifestyle, you must fear them or hate them. The second is that to love someone means you agree with everything they believe or do. Both are nonsense. You don’t have to compromise convictions to be compassionate.” – Pastor Rick Warren, 2012 in an interview with the Christian Post. (This quote has been incorrectly attributed to Dave Chappelle.)

Pastor Rick Warren made those comments not in reference to gender or sexuality, but rather in reference to religion and the relationship between Christians, Jews, and Muslims: “For years, we have invited Muslim friends to attend our Easter and Christmas services and they have graciously attended year after year…one of my dear friends is a Jewish Rabbi and my family has celebrated Passover at his home, and he attends our Christmas and Easter services.”

The point Pastor Warren makes is that none of the attendees give up their beliefs or values. Instead, he demonstrates that we can all love each other but we don’t have to agree; and we can disagree but I don’t hate or fear you because we disagree; I still love and have compassion for you and for each other.

I chose Followers that I believe have a connection to Dave Chappelle’s message. For example, Flame Monroe a transgender comedian publicly supported Dave’s message and right to joke about any issue; Ricky Gervais Tweeted in 2013: “Just because you’re offended doesn’t mean you are right”; and what would world famous pin-up model Betty Paige (who later converted to Christianity and abandoned modeling) have thought about this issue? My intention is to challenge you to think about each of the Followers – who are they and why are they there; what is their connection to the main character or message?