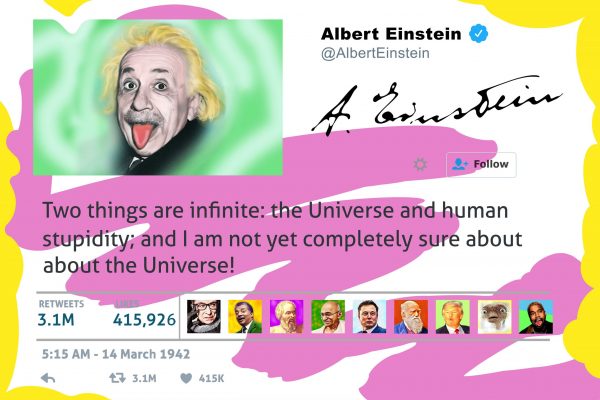 How often do you get frustrated over stupidity? How many times do you think about your own acts of stupidity? Is there no end to human stupidity? Not according to one of the most intelligent people to ever have lived – Albert Einstein. Gestalt therapist Frederick (Frtiz) Perls wrote that he and Albert Einstein spent an afternoon together and it was there that Albert Einstein spoke these words to him: “Two things are infinite – human stupidity and the universe, and I’m not yet completely sure about the universe!” They are first mentioned by Perls in his book, “Ego, Hunger, and Aggression: a Revision of Freud’s Theory and Method.” (1942)

My series “Famous Tweets In History” explores and highlights the timelessness of meaningful words by famous people. Some of those people, such as Albert Einstein, impacted the world at times when the words were written, spoken or televised but not able to be Tweeted.

The soundbites of yesterday are the Tweets of today, and vice-versa. The written and spoken quotes of authors, poets, celebrities, politicians, scientists, astronomers and philosophers of yesterday are the Tweets of today.
What might have occurred if Twitter existed in 1942 when Albert Einstein was enjoying an afternoon with a friend full of ‘warmth’ and “unpretentiousness” and revealing his perspective on the infinite nature of human stupidity? Who would have been his followers?

The image of Einstein that I used for this Famous Tweet is one that is instantly recognizable although few people know its story – and I wanted to express his character and eccentricity via neon colors. “On Einstein’s 72nd birthday on March 14, 1951, United Press photographer Arthur Sasse was trying to persuade him to smile for the camera, but having smiled for photographers many times that day, Einstein stuck out his tongue instead. This [black and white] photograph became one of the most popular ever taken of Einstein, often used in merchandise depicting him in a lighthearted sense. Einstein enjoyed this photo and requested UPI to give him nine copies for personal use, one of which he signed for a reporter.”
– Wikipedia

I chose to digitally paint this image – using digital paint brushes that appear to be and flow just like oil paints on a canvas, allowing me to create brush and bristle textures and the oily flow and feel of a canvas painting. Warhol had created a series on Einstein using the same photo but I wanted to give Einstein more depth and humanity, as well as be able to see the aging – the spots and wrinkles on his face.
Unlike Warhol who usually painted or silk-screened his subjects and flattened the eyes, I wanted to highlight the eyes and reveal more of the emotion of each subject (Einstein and his Followers) by painting each one with a style that matches their personality or character.

I also neutralized the boundaries of time while also highlighting the people that could have been Einstein’s Followers (some of them if they had been alive such as Kanye West and Donald Trump who both perceive themselves as geniuses, or Ruth Bader Ginsburg who is acknowledged as an intelligent and successful woman – an intellectual. I also included E.T. (the Extra-Terrestrial fictional character from 1982) who had he been real would have been following Einstein as a way to find the answer about how to get “home.”

This piece, “EINSTEIN: HUMAN STUPIDITY IS INFINITE”, captures a historic moment while blurring the lines of time and reinforcing what we believe to be true based on our experiences – that human stupidity has no end or boundaries – it is “infinite!”