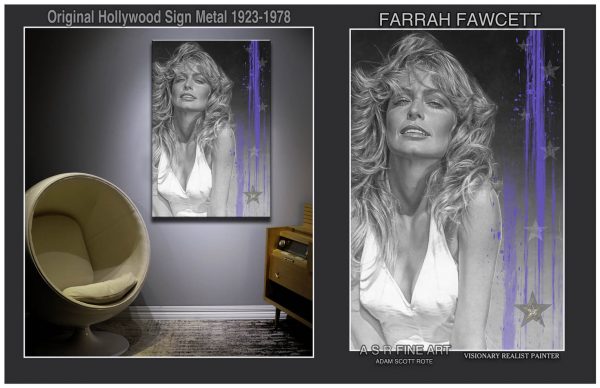 In 1976 this opening phrase launched Farrah Fawcett Majors in to the 1970’s Goddess Reign.
1950’s ushered in Marilyn Monroe as the reigning Blond Goddess, 1960’s we saw Brigitte Bardot grab that crown, but for me Farrah would hold my rapture above all.

Charlie’s Angel’s became a number one hit, and subsequently woman saw themselves for the first time in a role usually reserved for men. Farrah was the hair, the teeth, that dazzling persona with a pinup poster that became the all time best selling in the world.

Later her career would ride many waves but in the 1970’s Farrah Fawcett was our golden girl and my first love. Now 45 years later I’ve gained the courage and finally the ability to paint those signature blond tresses and million dollar smile and adorn it with the Hollywood Sign Artifact.

I’m extremely proud of the final result, enough so that this will be the first painting I’ve ever kept for myself, goodnight Angel thank-you for the memories.