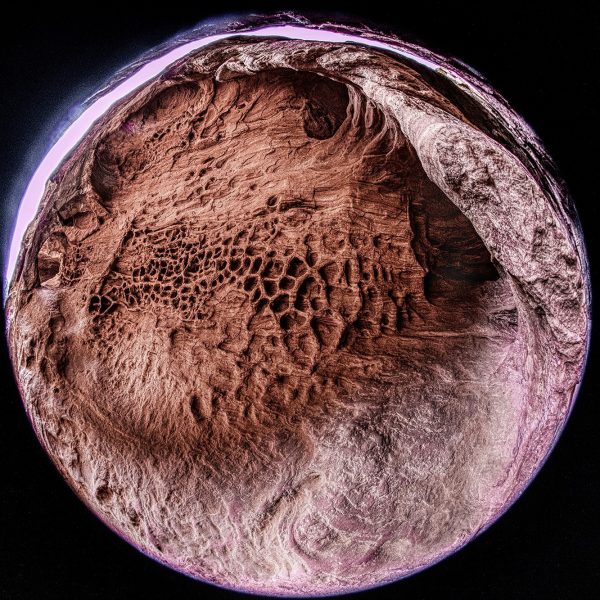 Tafoni is created by the chemical action of salt water on sandstone or granite over many millions of years. The salt water weakens the chemical bonds of the rock intermittently, and the weaker parts are washed away, leaving the tafoni pattern. When encountered in desert areas, as they are here, the tafoni indicate the past presence of shallow seas. Mandalas are traditional circular designs that offer symbolic images of wholeness, implying the reconciliation of opposites and their integration into a healthy self. The 8mm fisheye lens creates a circular image, distorting lines close to the edge. In the slot canyon environment, where there are no straight lines, the fisheye image conveys the feeling of an enclosure in a womb-like redoubt, inviting contemplation of subliminal meanings.

A NJ native, with a PhD from Brown in comparative literature, Simpson went pro as a photographer in 2002, after teaching college English, French, and Italian, and playing jazz piano professionally in New Orleans. Since then, his work has shown extensively in solo and group shows in the US and Europe, been published many times, and has won awards, and is part of the permanent collections at the Paris Musée de l’érotisme and the Williamsburg (Brooklyn) Art and Historical Center. His book of geological photography, EARTHFORMS: Intimate Portraits of Our Planet, won a GOLD Nautilus Book Award for 2019. earthforms.net