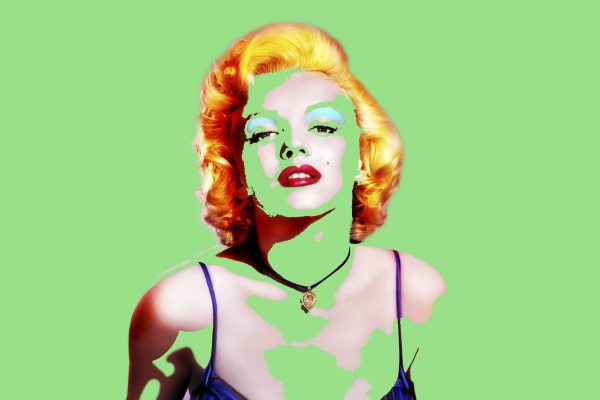 Marilyn Android: They Loved Somebody I Wasn’t

“The truth is I’ve never fooled anyone. I’ve let men sometimes fool themselves. Men sometimes didn’t bother to find out who and what I was. Instead, they would invent a character for me. I wouldn’t argue with them. They were obviously loving somebody I wasn’t. When they found this out, they would blame me for disillusioning them — and fooling them.” – My Story (1974; Marilyn Monroe co-written with Ben Hecht; 2007 edition), p. 133

I wanted to expose the ways that we do this to so many women and female icons – we only see their exterior, and they exist to satisfy us. We turn them into AI – Artificial Intelligence. We construct them in our minds as an android – an empty shell, transparent with nothing inside whose feelings don’t matter at all. I chose the color palette of the background green and her fiery hair to highlight society’s flashy, neon, shallow portrayal of Marilyn Monroe.