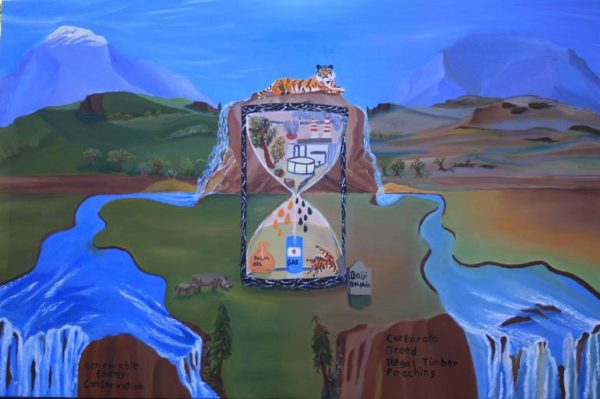 This Painting shows our choices. On the left side, I have renewable energy and the preservation of resources as it shows things are green and growing. On the right side Corporate Greed, Illegal timber, and Poaching. Time will tell, the tiger is a witness but greed will kill the witness. The gravestone is for the creatures that are extinct. Baiji Dolphin on the stone used to live in China’s rivers but became extinct because of industrial pollution in the Yangtze river. The idea for the painting came from many sources such as China’s industrialization, destroying forests in Indonesia for the production of palm oil, the poaching of rhinos for their horn, and mountain clear-cutting for coal production. I am an environmentalist and care about how we abuse the earth polluting the air and water, poaching animals to extinction for their parts, and the greed of multinational corporations that destroy nature legally and illegally for more profit. we should be guardians of the earth so that future generations have a beautiful healthy world to live in.