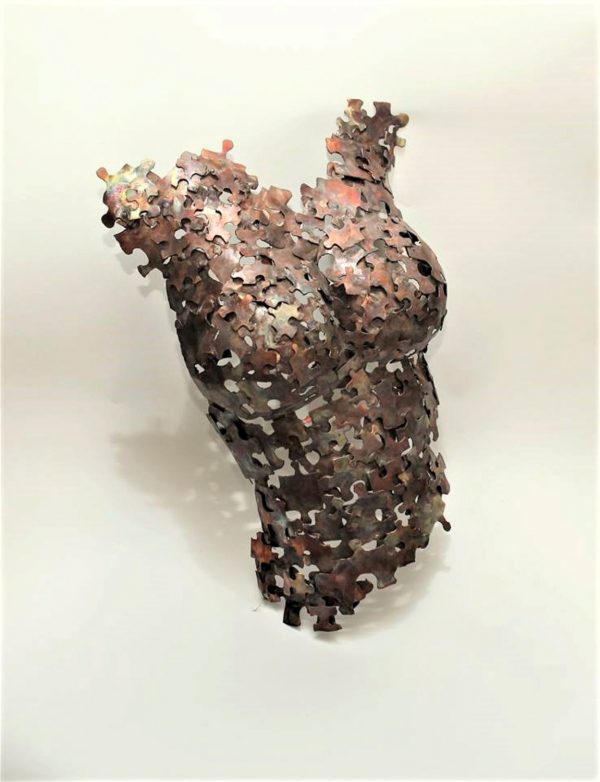 ‘For the international exhibition “Sacrifice” at the M.A.D.S. Art Gallery, Susan Woodford exposes three extraordinary works (“Momentum”, “Pieces of Me” and “Vishuddha”): using such a special material as copper, the artist skillfully succeeds in extrapolating pleasant feelings and limitless freedom. This reddish metal guarantees a good flow of energy and flexibility, and it is curious that it is represented by the planet Venus, as it embodies the feminine aspect of the human being. Venus and the metal are often associated with love and lust, but also they symbolize virtues such as charisma, beauty, creativity, affection and balance; they promote healing and invite one to live a fulfilling life. Each aspect can be seen in “Momentum” and “Pieces of Me”: they are part of a series in which Susan uses this material in small pieces of a puzzle in order to create a female bust. The artist concentrates above all on the upper part of a woman’s body, where it is possible to see the perfection and sinuous line given by the shoulders, the breasts, and the back. One particular choice that Susan makes is not to use a single sheet of copper, but numerous pieces merged together: and it is at this point that the element of connection, the indissoluble bond between the artist and the work itself, comes into play. Conceiving and building these sculptures piece by piece as if they were a puzzle has a fundamental symbolic meaning: it invites the viewer to carefully observe and analyze the whole composition and the different chromatic shades of each joint. Moreover, it captures the viewer’s attention, helping him/her to carry out a meditative and therefore reflective practice: the artist wants the observer to put back together the pieces of his/her own soul, shattered by the negative aspects of life, because only by uniting the whole can one have the strength and resilience to go further. Such robustness but also sinuosity is reminiscent of classical Greco-Roman statuary, and in this it seems that Susan really wants to portray the goddess Venus/Aphrodite, her sculptural silhouette and delicate forms. This can also be seen in the third work exhibited, namely “Vishuddha”: the fifth chakra, also known as the ‘throat chakra’, governs all the organs around her. Her Sanskrit name means “pure”, as the body’s energy flows upwards from below, purifying herself and taking shape through listening and communication. Representing the bursting vitality of her nature, as she is awakening from a deep sleep or emerging from a cage, Susan emphasizes aspects which are both divine (again reminiscent of Venus) and sensual, suspended between the sensitive and the hypersensitive, in which the observer can admire the profound ecstasy caused by that energetic tension that affects the whole body. Like a lioness, she represents all the determination and tenacity of every woman: for these reasons, the artist aims to make the character emerge and free her into the universe.’