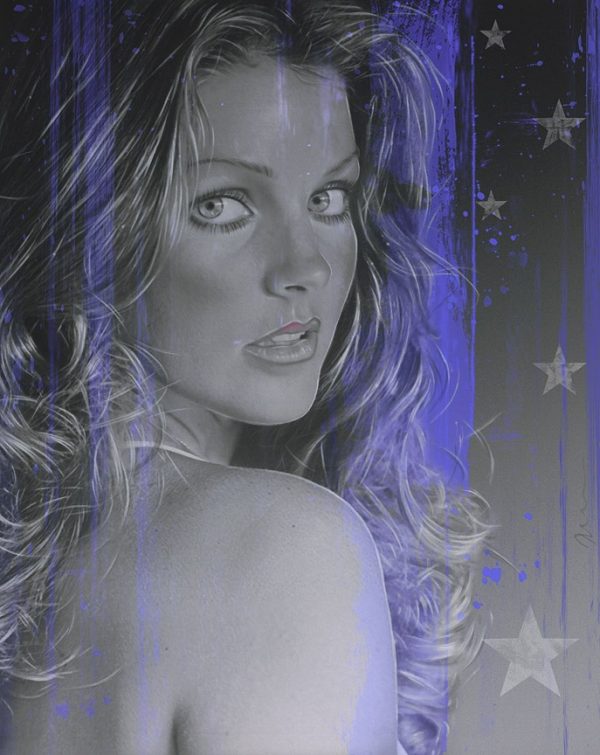 It once stood high on a Southern California hill known as Mt. Lee, a beacon of hope, dreams and tinsel town stardust. Drawing actors, musicians, and tradesmen from afar, now a piece of this legendary icon, The Original Hollywood Sign, will become a part of an artistic debut that famed visionary realist, Adam Scott Rote is launching with his original “Goddess Collection.”

Starting off with classic silver screen black and white paintings of Marilyn Monroe, Audrey Hepburn and Elizabeth Taylor, the rare historic sign’s metal is meticulously cut into a star and then mounted on two more layers of brushed aluminum and featured prominently in a cascade of shooting stars and transparent paint splashes. These additions brilliantly add more allure to Adam’s touch of colored lipstick on each legend he paints. Next, he will add several layers of diamond dust to the painting, then sealing it in a deep crystal gloss, finished strikingly by the addition of Swarovski crystals.  This never before realized historic fine art will only put a spotlight on the dreams of those iconic movie stars who once graced the silver screen with their presence.

When legendary actress Stella Stevens first saw her painting by Adam, she referred to him as a “pop cultural phenomenon,” and another legendary icon, Angie Dickinson, said of Adam’s painting of her, “You are my personal Warhol.”

Since the age of 12, Adam has honed his skills with apprenticeships in the fields of airbrush and portraiture, emerging 45 years later to become the most collaborated painter with Academy Award and legendary performers then any other fine artist in history, either living or passed. “You certainly know how to paint women” stated one of the original nine donors behind the 1978 restoration effort on the Hollywood Sign, Playboy founder, Hugh Hefner, and the King of Comedy, Jerry Lewis, when presented with Adam’s portrait of another legendary icon said, “Nobody paints Marilyn Monroe like Adam!”

And now, those hopes, dreams and tinsel town stardust has been reborn as Adam partners with Hollywood Brand LLC in these breathtaking and truly original paintings, worthy of any connoisseur’s collection of fine art.  It is a sparkling tribute to the golden era, in all of its glory, and with all of the beauty only Hollywood could produce. It’s a special re-enactment in art of the most recognized time in cinematic history.
Ad