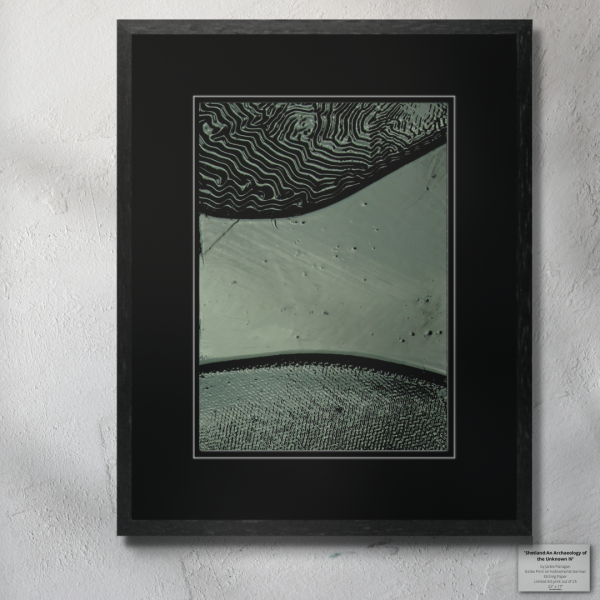 ‘Shetland IV: An Archaeology of the Unknown’ by Jackie Flanagan

Shetland:An Archaeology of the Unknown I – VII is a series of work using abstraction, automatism and materiality to depict a sense of the unknown. This sense of the unknown, simultaneously explores journeying into the sub Arctic and inner consciousness. The series began as an experimental process by pouring tar randomly onto a large sheet of canvas and allowing material ‘possibility’ to occur. This resulted in a heavy textured rippling effect that flickered in light, not too dissimilar to the sea (the use of tar as a medium is not accidental on my part – I’m drawn to its darkness and lustre qualities to emanate mystery). Once fully dried, the artist-as-archaeologist excavated the canvas site and I began to extract numerous samples which best expressed my visual language – compositions with a solid rectangular like shape in relief set against a decorative fluid plane. These samples were than rearranged sequentially to capture an inward-journeying which culminated in Shetland IV (as the epicentre of the self) before recommencing outward once more. I later renamed these archaeological samples as Shetland as they echoed my sensory and emotional response to that place after visiting there in 2015. Shetland is cold and nestled in the dark rippling waters of the North Sea which is home to the Orca.