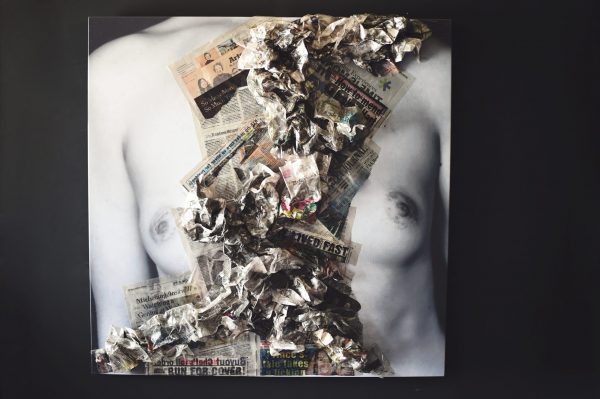 Trashy Girl is the second in the F*%k your Opinion series. She is a fine art black and white image, printed on canvas, and covered with newspaper and resin. All of the newspaper articles were hand selected, so she is quite a statement when hanging on the wall!

36×36, 2019 This product is located at our Los Angeles gallery. Local delivery is available.

The F*%K your Opinion series was a response series I created after my first show. I had three separate gentlemen walk up to my work (black and white macro photography) and explain how I could do it better. The first, suggested I add glitter to my cigar fine art. The second ascertained that if I wanted to photograph cigars, which were trash, that I should photograph the newspaper, since it is all trash anyway. The third and final man explained to me clearly that my work was NOT art, and that the only way it would be considered art, would be if I put it on canvas, and covered it in teal paint.

When I came home from that show, I photographed a woman in her most vulnerable, and covered the images in glitter, newspaper, and teal paint, and called the series “F*%K your opinion.” 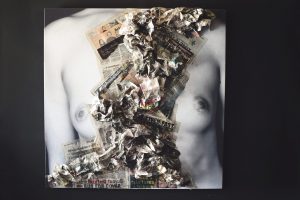