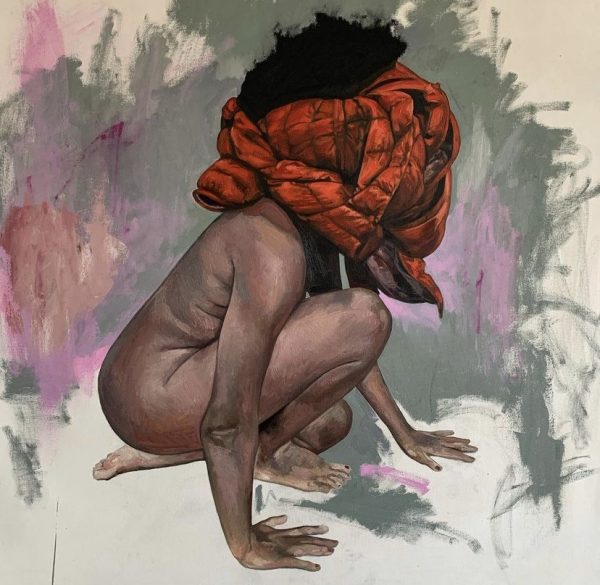 An honest portrait is one that reveals those intangible aspects present in a person’s character. Can a painted portrait evolve enough to become an accurate psychological profile? This was precisely the question to be explored with this painted series of female portraits by artist Walter John Rodriguez titled “COLD FRONT”.  “Cold Front summons a soft irreverence to deeply seeded conventions as it pertains to female behavior, gender, psychological trauma, relationship building and self-identity.

The series title references the weather directly as a metaphor for an incoming set of warranted circumstances that will bring change. An inevitable plot that will unfold with devastating results to the status quo but that at the same time will make room for improved awareness. The word “Cold” is in order to begin constructing a concept of emotional distance as the word is so often used to describe relationships that lack commitment or chemistry.  The word “Front” is an indirect form of reference to a person’s face. Winter puff-jackets are depicted as a strategic device to wrap female nature in a level of mystery comparable to a winter storm. The concealed faces were the artist’s choice to step outside the conventional face portrait in order to bring focus to unexpected vehicles that reveal behavior patterns and identity such as body language.

This entire collection may surprise some viewers as its prime purpose is to be unconventional despite the academic artistic approach. The deliberate choice to include written statements combined with black and white drawings were attempted as a way to challenge traditional ideas surrounding painted technique and thematic concept. In other words, you may be able to identify undertones of defiance towards established beliefs regarding what is required by a work of art to be a complete painting. This technical irreverence is complemented by strong claims for social justice in regards to mental health, emotional aggression and self-identification.

Born in Havana in 1981, Walter John Rodriguez now holds a studio in New York City. His love for drawing and painting developed at an early age in Cuba where he made every effort to learn artistic skills despite having limited resources. After immigrating to the U.S. his continued interest in art motivated him to seek formal art training graduating in 2002 with a B.F.A. degree from the University of the Arts in Philadelphia. Since then, he has participated in high profile art fairs, residencies and also exhibited throughout the United States. His work has been included in multiple private collections and group exhibits in Florida, California, New York and New Jersey.