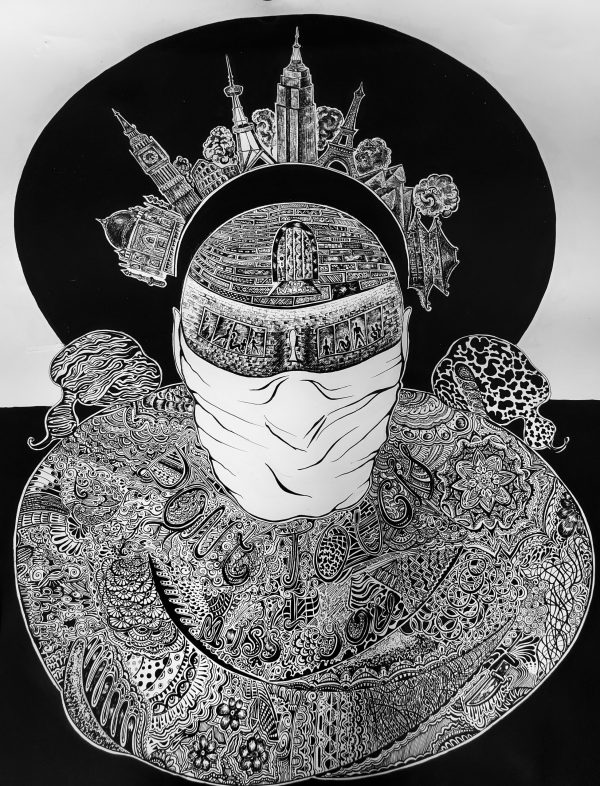 Sofie Butskhrikidze (PITANIUS) was born in 1986 in Tbilisi, Georgia. She currently resides in New York City. Since she can remember, she has been drawing, and she always knew she wanted to become a professional artist.

In 2003 she enrolled at the Fashion Design and Fine Arts faculty of the State Academy of Arts in Tbilisi, Georgia. At the same time, she also taught art for kids at a local art studio. In 2006, she took one year off studying, and she moved to London, where she was creating handmade accessories based on her inspirations. Upon returning home, she continued her studies, and at the same time, she began working as a set designer and makeup artist at a theatre. In 2008, she graduated from the Academy of Arts. Her final dissertation ‘’Immortal Mohegan’’ was inspired by her lifelong admiration for Native American Indians. It was a great success, and the exhibition itself had a lot of publicity and media coverage. Towards the end of 2008, she travelled to Marrakech, Morocco, for pottery training, learning the native clay techniques and having a small exhibition. In 2009, she went to Amsterdam and started working at an art gallery. For the next five months, she prepared artworks for the show ‘’Dionaea Muscipula’’, working in oil and acrylic on cardboard. She felt like she needed giant cardboard to express herself, her thoughts and feelings and plenty of colours. A couple of months later, after returning to Tbilisi, she figured out that something had changed. She realized that she could not work with colours anymore, and this is how her journey with ink art started. In 2012, she participated in the group exhibition ‘’Dual Verse’ at the national parliamentary library of Georgia. It was a two-person exhibition that included paintings and drawings. The idea was to show that different techniques and styles could express similar thoughts, feelings, and visions.

In 2013, she went to New York for a couple of days and fell in love with the city straight away. After having visited many countries worldwide, she thought that she had found a place where she wanted to live and create. In 2015 she moved to New York permanently.

Sofie participated in several exhibitions and, most recently at the London Art Biennale 2021, she presented her artwork ‘’Midnight Dream’’.

Artist about her work: “I fell in love with drawing ornaments while still in my first year at the Academy. It was my language, thoughts that I could talk to others without words. My decorations became the narratives of my stories, pain, disappointment, joy, dreams, beautiful and, at times, ugly reality. I used Japanese ink and a fountain pen. I loved that I could control the thickness of each line to get exactly what I wanted. I have never used a regular ink pen as it feels too simple and deprived of depth.

My artworks are based on vision, dreams, and reality how I perceive them. I never know what any artwork holds after it is finished as they flow together with my emotions, feelings, and change along with periods of my life.”