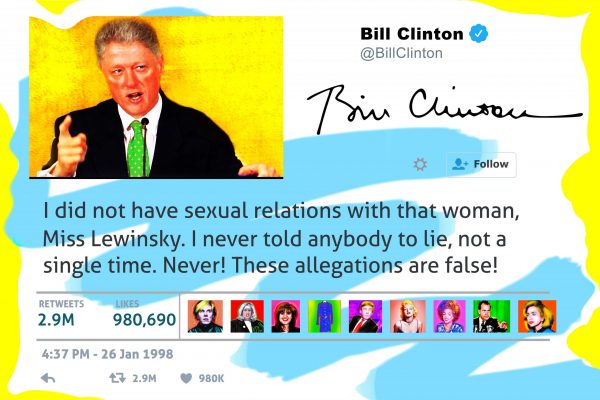 This piece is not about political ideologies; it is about the link between power, character and corruption – themes of which I have explored for many years as a human behavior expert.

This historic moment is one example of that phenomenon: Between 1995 and 1997, The President of The United States of America, Bill Clinton, has a sexual relationship with a 21-year old intern and then, on January 26, 1998, he perjures himself when he denies having had sex with her.

Years later, when asked to reflect upon the real motivation for cheating, Bill Clinton says: “I did something for the worst possible reason – just because I could.”

Power creates opportunities and temptations, and often destroys one’s values and principles. As was the case before him with many people in positions of power, Bill Clinton, when confronted about the allegations of sex & cheating, lied believing he could get away with it.  But lo and behold, what finally incriminates him is a blue Gap dress which proves he did have sex with his intern.

This event and the specific moment when he utters the words to the television camera and to the world, “I did not have sexual relations with that woman, Miss Lewinsky” becomes unforgettable.

As part of my series, Famous Tweets In History, I create what might have occurred if Twitter existed in 1998.

I wanted to contrast the bright, joyful colors with the dark subject matter of his Tweet – the lies and denial, and yet neutralize the boundaries of time while also highlighting the people that could have been his Followers (some of them if they had been alive such as Marilyn Monroe, who too, was believed to have had an affair with a President – John F. Kennedy.) I chose to portray those Followers as part of the Bill Clinton sex scandal story: Is Andy Warhol scared of the powerful and brash whistleblower Linda Tripp? Is Donald Trump, a then close friend and ally of Bill Clinton turning to Marilyn Monroe to whisper something about this case and Clinton’s words? What is the link between the hand gestures of another President who lied – Richard Nixon who also created history on November 17, 1973 when he pointed to the world and nervously lied with the infamous words, “I am not a crook!”

This piece, “CLINTON: I NEVER”, captures a historic moment while blurring the lines of time and reinforcing how Twitter has become the tool of the powerful to express lies, truth, opinions, emotional outbursts and to coalesce their power by building more Followers.