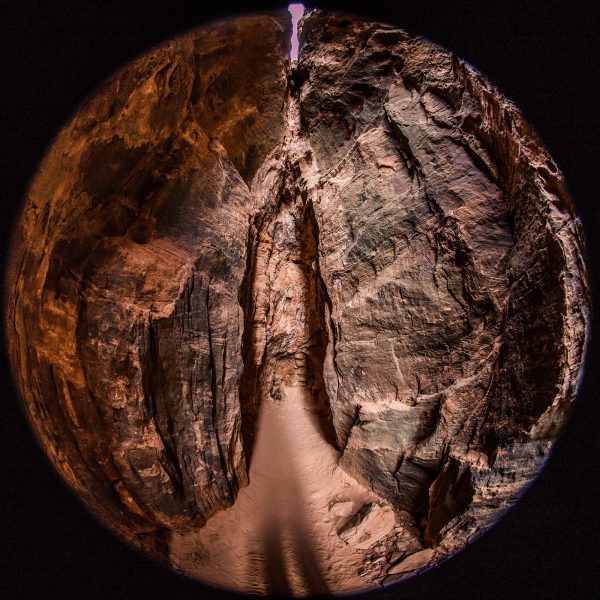 The view down the narrow shallow interior of Jenny Slot Canyon through a fisheye lens. Taken in Snow Canyon State Park, in SW Utah.

Slot canyons are created by infrequent heavy rains that produce flood waters whose violence abraids the rock walls of narrow canyons. This one is shallower than most with lower walls, and not much space for the water to exit on the far end. The result is that its walls are elaborately incised with layering, small arches, and the honeycomb patterns known as tafoni. This image shows the light entering from behind the photographer, whose legs cast a blurry shadow in the foreground. If the “Portal of Venus” is too gentle a term for this rough rock, an alternate title would be “The Slouching Beast’s Rough Birth Canal”

About Joel Simpson:
A NJ native, with a PhD from Brown in comparative literature, Simpson went pro as a photographer in 2002, after teaching college English, French, and Italian, and playing jazz piano professionally in New Orleans. Since then, his work has shown extensively in solo and group shows in the US and Europe, been published many times, and has won awards, and is part of the permanent collections at the Paris Musée de l’érotisme and the Williamsburg (Brooklyn) Art and Historical Center. His book of geological photography, EARTHFORMS: Intimate Portraits of Our Planet, won a GOLD Nautilus Book Award for 2019. earthforms.net.