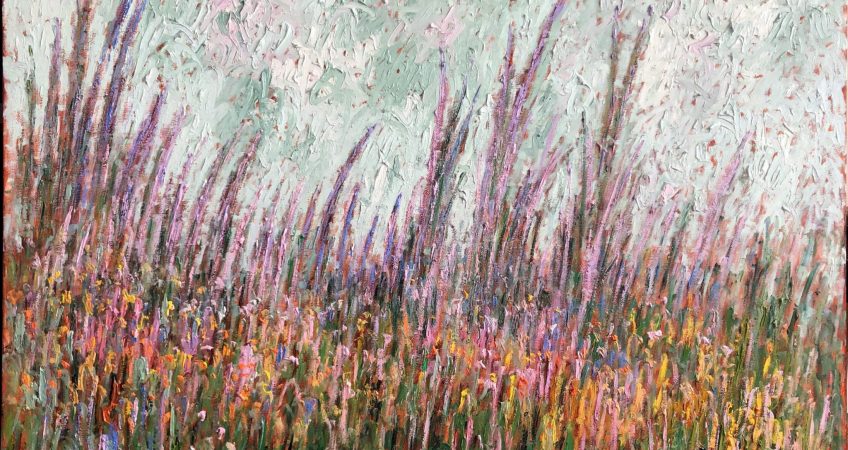 Samir Sammoun is a painter who captures movement within his pieces. His inspiration stems from his travels all over the world.

Samir has been exhibiting his work at Artexpo New York for over two decades and has been an active participant in our RAVE virtual events!

Q: Introduce yourself – who are you and what do you do?

A: My name is Samir Sammoun and I am an oil painter.

Q: What is your background?

A: I was raised in Joun, Lebanon on my family’s 1,000-year-old olive plantation. My father, Fares Sammoun, was a broker at the Port of Beirut, and an olive grove farmer. My mother and father were married for 65 years and I am the third child in a family of six children; five boys and one girl. I began painting at the age of 13 while continuing formal education. After completing my studies at the Ecole des Artes et Metiers in Beirut in 1969, I emigrated to Montreal, Quebec, Canada at the age of 21. There, I obtained an Engineering degree in Electronics.

A: I work in a series of images from one palette. I work with oils on jute and linen canvas, applying a heavy impasto, created in fast emotional bursts of energy. The result is a spontaneous rendering of the subject as if a flickering effect of light is coming through. Critics like Noel Meyer of MAGAZIN’ ART said, “Sammoun attempts to make his audience feel the wind blow through the trees, the heart in the air and the colors of the sky…”

Q: What art do you most identify with?

A: Critics identify my work as Modern impressionism. I am mostly influenced by Vincent van Gogh, but also by Camille Pissarro and Claude Monet. However, my technique is exclusive to me. I would put it this way: in a specific canvas, my work is 90% Samir Sammoun, 5% van Gogh and the rest is a combination of other masters.

Q: What has been your favorite experience so far as an artist?

A: From an artistic point of view it is of course and with no doubt, the discovery of my technique and subjects of paintings in the 80s, followed by, and still continuing the research to introduce new subjects and build on the experience of the technique, which evolves smoothly without a break from the past. Collectors can recognize a Sammoun executed 35 years ago and connect it with what I do today. From a career perspective, my favorite experience was definitely my participation in the first Artexpo New York in 1996, which I continue exhibiting every year. Thanks to Artexpo New York, galleries in the United States discovered my work and began representing me. Other important benchmarks in my career are listed below:

Q: Who inspires you?

A: As an artist, mostly Vincent van Gogh as I stated before. My paintings are based on where I live and places I have an emotional connection with. So mainly I paint scenery from my birthplace Joun in Lebanon, Brossard, Montreal in Quebec Canada, Ile d’ Orleans near Quebec City, Toscana Italy, Paris, Florida and the Miami beaches, Boston Park, and Central Park.

Q: What is the best advice you have received?

Q: When you are not working, where can we find you?

A: You can find me on the golf course.

Make sure to visit Samir’s storefront to see and collect his beautiful paintings!

Any cookies that may not be particularly necessary for the website to function and is used specifically to collect user personal data via analytics, ads, other embedded contents are termed as non-necessary cookies. It is mandatory to procure user consent prior to running these cookies on your website.